I was on a weekend bird watching expedition at a sanctuary in South India. My mission was to click the Spotted Owl, which I’d (pardon the pun) spotted there on my last trip. It was 4 am, it was pouring, and that’s when I started my birding trip. After driving for an hour, I reached the destination – 20 minutes late. I parked my car and picked up my backpack stuffed with Nikon binoculars, Canon Point & shoot camera, Spotting Scope and Tripod. 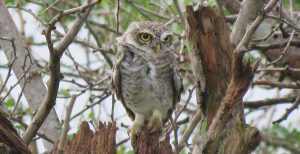 I was proud to be the first person to enter the sanctuary. I gently walked towards the watch tower and climbed up with my bird gear. It was about 40 -50 feet above the ground and accorded panoramic views of the lake in the north, farmland in the south and a lake bund laid with a walking track. It was so silent, I could hear the sound of the breeze. I enjoyed the cool air and the light drizzle.

My only worry was that my birding gear shouldn’t get wet or moist. I started to install the tripod and mounted the Canon SX 60 HS. Even though I started browsing the woods, I was focused on a specific spot – the place where I had sighted it the last time. Half-an-hour went by but there was no sign of the Spotted Owl. I wondered if I was wasting my time. 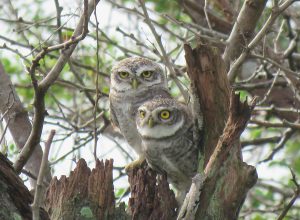 The breeze made the branches dance to its tune. It had just started raining when I spotted something with the white dotted softball. I zoomed in and saw the Spotted Owl! I was in a dilemma – to pack my gear or not. All of a sudden, it jumped out from the tree hole and started hopping from tree to tree. It reached almost the top of the tree, flew down to the same place and sent some sort of a message to the hole! All of a sudden, another owl popped out of there. I clicked and clicked with my Canon camera until I got a nice shot.

Its distinctive characteristics are cinnamon-brown plumage, white spots around the head and body, yellow marble eyes with a black dot, white eyebrows, and a funny beak. It nods its head up and down or moves it in a triangular rotation to get a 3-D image of the prey. It rotates the head 270 degrees for a quick glimpse of its back. It is a soft and silent bird. But, in movies and books, it is wrongly portrayed (think ghosts, cemeteries, unlucky). It has a unique call / chatter in the night.

Even though owls are nocturnal, on some occasions you can spot them in the daylight. This is the first time I took a picture of Spotted Owls in daylight. It was once commonly seen in cities, semi-urban, and rural areas. Currently, its population is dwindling because of rapid urbanization. Its main prey is insects, mice, shrew, lizards, and other little birds.

Interesting facts about owls: Owls have large eyes, binocular vision, good depth perception and can easily spot the prey even in low light.

They have exceptional hearing and can use their auditory advantage to locating prey in the dark. They have long and soft feathers, which lessen sound as they fly.