On my recent trip, I got a chance to visit some magnificent birds. They are fantabulous nest weavers and their unique techniques practiced in before and after building the nest is amazing.

I was searching for the Baya weaver’s habitat for the last three months and got a chance to spot this in an unexpected pilgrimage trip.  As usual, I was walking with my birding camera to spot some avian species.  I stopped at a place where two nests dangling in a palm tree.

I was stopped by two kids. They were watching me for more than 15 minutes and inquired on my camera and what I’m doing? I replied reluctantly, I’m taking photos of Baya Weavers. They were very eager to see the photos which I clicked.

Without informing, I moved ahead to take shots of other birds. The elder one told me, Anna! Do you want to shoot more birds? I said, Yeah. There is a place, few meters away. You can see them in colonies. First, I was reluctant to move further. Then, I made up my mind and followed them. He took me across a paddy field and a small stream running across the paddy fields. The land was so pristine green. Even from a few meters away, I spotted a palm tree dangled with Baya weaver’s nest, all facing in eastern direction. 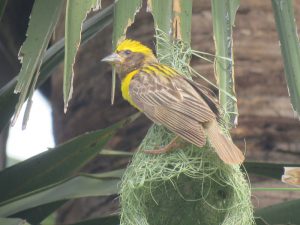 The male baya weavers are one of the best-in-class craftsmen to build hanging nests for their to-be-born kids. The weavers love to live in colonies. They start weaving the nests with three to four peels of green grass which form the heat shield. The nests have egg chambers and they help them to stay out from the predators. 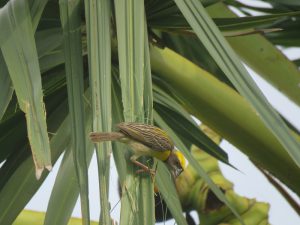 Baya Weavers build their nests towards the eastern direction to keep away from rain and wind of the South West monsoon.  They mostly select acacia or palm trees for weak branches which are non-accessible to predators. They select the place to build their nests in the highest place and near or above water bodies. They use dry grass, paddy leaves, and long stripes of palm fronds to build the nests. They make a O-shaped structure, separate egg chambers, and a passage. The egg chambers can be accessed by the side entrance of the passage. 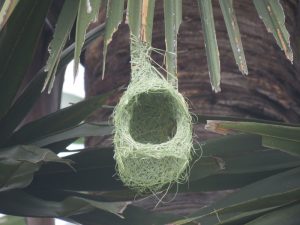 Before completing the entry passage, the male invites the female bird to do a site visit.  The female bird supervises the nest with the following specifications; the nest should dangle on a thin branch, and built in a height.  The female even visits the interior of the nest.  After doing the quality check, If it’s satisfied with the nest it accepts it.  From the next minute, they join together to complete the nest and ready to hatch.  It takes 18 days to complete the nest and within that process they do nearly 500 visits. 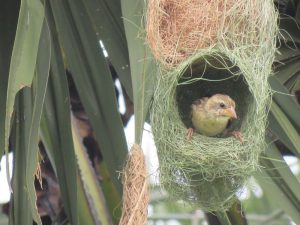 The abandoned nests are considered not up to the stringent quality of female specifications and they are prone to predators.

Characteristics: The breeding adult male bird has an attractive yellow crown and upper back. The juvenile male and female birds look similar to the female house sparrow. Now it has to roll in fast before the South-West monsoon which blows wind and rain drops which make the nest not easy to dangle and may fall from the supporting point. 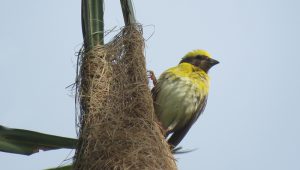 When I was researching on these birds,  I came to know that these birds were street performers, do string beads, make fire toy cannons and pick up coins in their beaks.  The other interesting story is that these birds fixed fireflies inside the nest to decor the interiors.