I was taken on a detour to one of the art shows close to the lake nearby. It was a huge and vast with sun’s spotlight perfectly focused on each and every art piece. The entire space was fitted with an ambient sound to create a natural setting.  While I was watching each and every art piece, something attracted my eyes and mesmerized me for more than an hour or so, I felt like ages had passed and the time had flown. It was glorious to behold and a truly magnificent masterpiece. Yes, the lake was filled with these beautiful creatures named Painted Storks.

It is a bird of fair size, almost a meter high and well-built. It was wearing orange scarves and pink stockings. The beaks that jutted out like Palmyra sprout curved at the edge. The full body is primarily white, black textured on the tip of the wings and tail. There the vibrant rose edged before the tip of the tail. It’s from the House of God, who created this masterpiece. The attractive appearance gives the bird a glorious look from the distant. 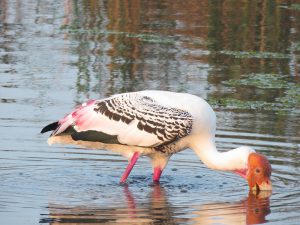 As I said, I was closely watching the characteristics of this bird for more than an hour. One stork trained its fiery eyes on me, leaving me spell-bound by its serene beauty. Then it turned its attention to the water, stirring it with its beak and confusing the fishes into surrender. 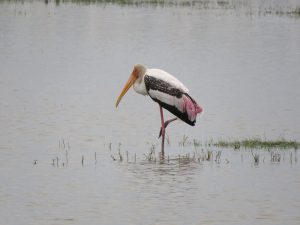 It stopped every now and then to prune its feathers with its beak. The other one was stubborn with a one-legged stance and was so immersed in its daily beauty routine reduced its chances of grabbing the biggest fishes.

It has a voracious appetite and feeds on a variety of fish, frogs, mollusks and crustaceans, small reptiles, and insects too. An insatiable clamoring brood, It often resorts at magnificent lakes and spreads of shallow lagoons.

If you wish to join me, write to askthebirdman@gmail.com