A brief stop at the pristine Chitrey Monastery on the Indo Nepal border, and what followed was a gradual ascent and level walks through an undulating meadow. The wind was strong and the wind chill was creeping into my bones.

I gazed down the valley as the fog briefly cleared and large bird sad smugly and still on a rock a few meters away. My heart skipped a beat when I saw the majestic Himalayan Griffon gazing back piercingly at me. 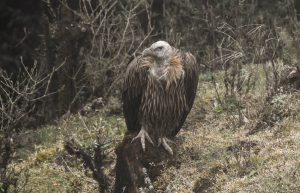 It was the first time I had seen one of this. I stopped to savour the hypnotising moment. It was as though the bird was dressed up for a formal event with a feather bow tie and a sandy coloured coat looking absolutely dashing. The griffon didn’t waste time and soon hopped and took flight as I still watched with awe at its expanse. 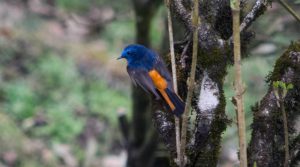 Something, however, caught my attention, small and bright, a Blue Fronted Redstart flitted across on the forest floor and perched with his back to me on a branch, looking like a superhero with a blue cape and contrasting chestnut orange underparts, it was a picture of beauty. 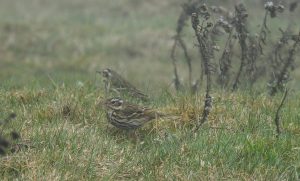 The trail seemed endless and  I was enraptured by the sheer solitude and spaciousness of the mountains.  But I was not alone,  I noticed movement on the open grassy area beside me. Walking me were a couple of Olive-backed Pipits lost in their food hunt. 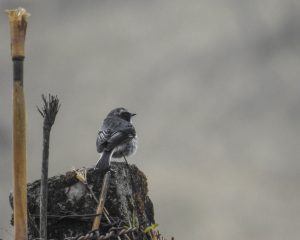 The day was finally getting over with arrival at Tumling, and standing guard on the entrance to the village was a Grey Bushchat on a pretty perch.  The altitude gain had been significant, we were at 10,000ft ( 2970m), and, it had been a challenging trek with rain, snow and strong winds.  Tired and cold,  it was a welcome relief to hog down hot soup and thaw in the heat of the tea house kitchen. We called it a day and recharged all the batteries including ourselves.

It was a bright beautiful morning, our guide hurried us to see the Kanchendzonga range and the Sleeping Buddha configuration in all its breathtaking glory.  A nearby Rhododendron tree had burst into bright pink flowers and was flocked by birds I d never seen before, all butting their heads into the flower and coming out fully pollen faced.  As if on a ramp walk, each bird sat on the porch of a nearby pine tree and tweeted before flying away.  A White Collared blackbird, Rufous-breasted Accentor, Grey wagtail, Streak Throated Yuhina, Fire Tailed Sunbird, Chestnut Bellied Rock Thrush…I was overwhelmed and decided to soak at the moment putting my camera aside. To Be Continued… 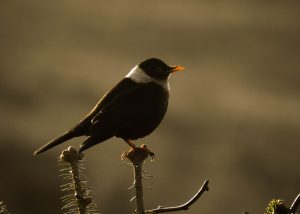 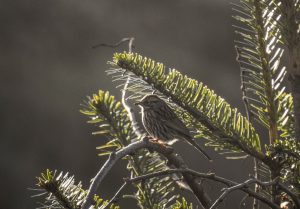 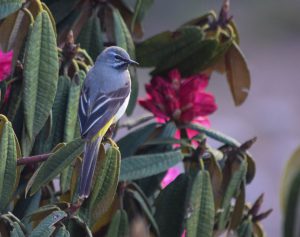 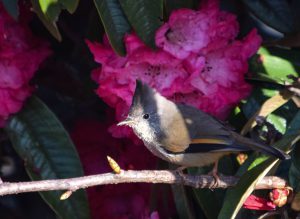 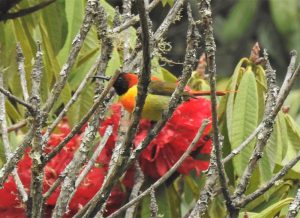 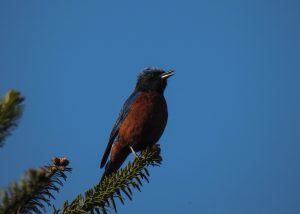 Photos and Essay by Sripriya Rajan