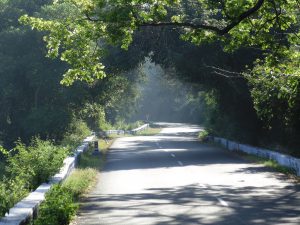 On kissing the footsteps of Anamalai hills, this little paradise invited us with it’s scenic beauty and with the melody of chirping birds.  On the banks of Aliyar Dam, we spotted a Red Watted Lapwing, Green Bee Eater, Jungle Myna roving on the green pasture,Brahminy Kite swirling above the water body and a band of Grey Langurs jumping joyfully.

This scene came to a halt when a passersby  Lorry Driver stopped and cautioned us on herds of Wild Elephants passing through nearby. So we hopped into the car and reached the spot, but it vanished before we reached.

Our car was moving uphill slowly, on the 20th hair pin bend, we had a chance to see a bunch of Nilgiri Thar grazing  the Mountain Steep and on the other end a scenic bird’s eye view of Aliyar Dam. I just opened my minimal specs camera to try a nice shot but ended with a blurred one. We halted at a local tiffin centre for breakfast. I ordered for a plate of  Pongal and Vadai with a cup of hot tea (it tasted merely like a cup of sugar syrup -homemade huh! ).

It was so nice when we spotted the tamed (Wild Boar) in the vicinity and Indian Giant Squirrel with his bushy tail dangling in the little wind. The Group of Lion Tailed Macaque joyfully jumping.

We reached our HomeStay after a quick & easy vegetarian  lunch we started our birdwatching trip. Every nook and corner of hill was covered with Tea Plantations giving  no chance  for a native trees and wild animals, thus erasing the flora and fauna.

On the way, we found a bunch of Photographers armed with their telephoto lenses hoping for an adventure click. While waited for about 15 mins we heard an oozing sound,and tearing the wind came our Hero,The  Great Indian Hornbill and roosted on the Silver Oaks. The Great Indian Hornbill is an interesting bird to watch for it’s majestic horn, arched beak, red eyes, and mannerism. 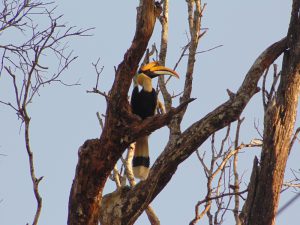 On the second day, at around 5 am  we were getting raleady with our outdoor gears to spot some more birds and animals. When I was brushing my teeth, I heard nice long whistling note from the bird Nilgiri Laughing Thrush, it was so melodic to listen in the early morning. 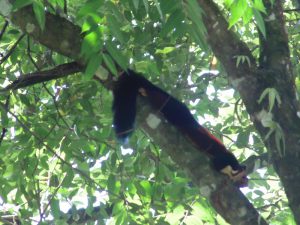 I was driving the car in the early morning, it was so chill and thrilling. We halted near a deep wood, and started walking towards a thick jungle. Suddenly, I spotted a Wild Gaur and raised alarm. Our Forest Guard asked us to keep silent, until it moves from that place. In an unknown location we  waited more than half-an-hour hiding in the bushes without moving an to get a glimpse of our Hero – The Great Indian Hornbill.  Suddenly  We heard some shuttering wings with the huge beak and feathers flying above our head,there it was The Great Indian Hornbill.

On the way we spotted Scarlet Minivet male & female, Common Hoopoe, Black Kite, Red Whiskered Bulbul, Black Eagle, Malabar Grey Hornbill, Blue Beard Bee Eater, Chestnut Bee eater, Yellow browed Bulbul, Common Iora, Golden Oriole, Long Tailed Shrike, Ashy Minivet, Grey Wagtail, Large Pied Wagtail, Magpie Robin, Velvet  Fronted Nuthatch, Common Flameback Woodpecker and many more birds. From there we headed to the Solaiyar Dam, on the other side we spotted a of herd of Elephants. The main attraction was a Male Tusker with an well-built muscular body with the long tusk standing near the tree,while the other elephants were leaded by Female one. 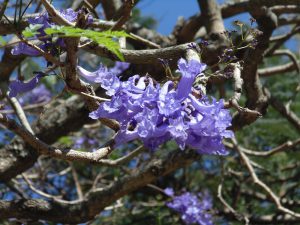 We ended our trip recording over 42 species of birds, Nilghiri Thar, Indian Giant Squirrel, Grey Langur  Nilgiri Langur, Lion Tailed Macaque, Bonnet Macaque, Wild Boar, Rat Snake, Herds of Elephants and Great Indian Hornbill. Though It was a short trip it was an interesting one which I will remember forever.